Pictures: Here is another shot of the Rufous Hummer on his favorite guard post. 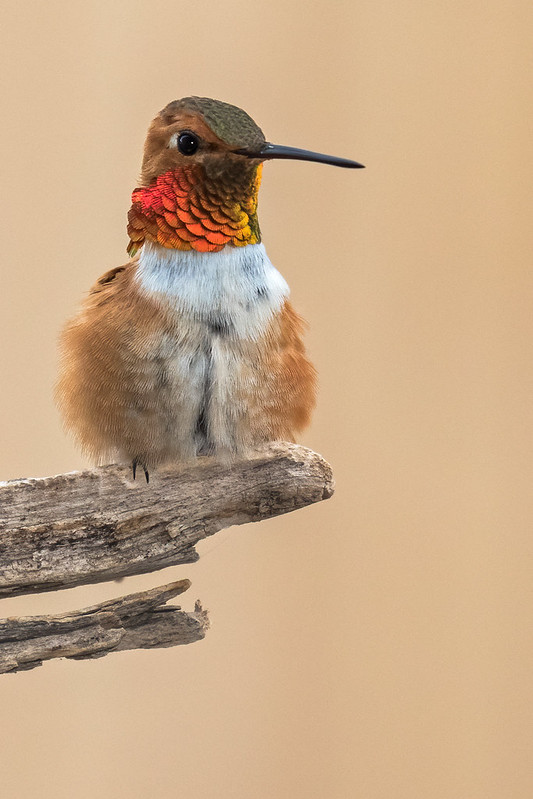 Just Fussing: Subject Adobe : I am starting to play more with Digital Photo Professional that comes with any new Canon Camera that one buys from Canon(as far as I know) and I am feeling more comfortable each time I do a photo in it. The reason I am doing this is that one day I will move to a Digital Canon Camera and I always shoot in Raw and use Photoshop CS6 and it’s build in Adobe Camera Raw to Edit the image. However when Adobe stopped making new Versions of Photoshop to sale because they decided they could make much more money by renting it to folks, they stopped supporting the Raw updates for new camera in all the Full Software versions like CS6. They now only update their rental version for new cameras with new kinds of raw camera file formats.
I don’t like rental anything and certainly not rental software. So, I will use CS6 for many years to come, and I think it will hold up fine for the kind of editing I do. Should the day come that CS6 won’t do the job I will move to another brand of editing software that one can buy and not rent.
If I ever upgrade to a 4K monitor(or any monitor with a resolution higher then 1080p) then that may be a time that I would have to possibly change from CS6 too, because I hear it doesn’t scale well to higher resolution monitors. I think 1080p monitors will be fine for my use for some time to come too, because most of the folks out on the net don’t have the higher resolution monitors yet, except for apple folks. Shoot, many of them in my age group don’t even have 1080p yet. I have one last thing to say and that is, I think I am keeping a bit more detail in my images when using DPP instead Adobe Camera Raw, or maybe that is just my wishful thinking 🙂. At any rate, DPP is staring to grow on me.
🤔, Well I guess that was a bit of a long answer(that no one ask for by the way) as to why I am playing around with other Raw editing software, but that covers it!

Maybe my next fuss will be about photo storing/sharing sites …. Photo-bucket/Flicker 😁.

Using Smiley : I often use smileys and I don’t know all the meanings to each one, so I just pick one that looks to me like the feeling/meaning I want to convey … but does that really work out …. well, maybe not. I might be putting out things I don’t really mean, LOL. The thing that got me thinking about this is that I sometimes use a text to speech software that reads things back to me, so I can hear what it sounds like. As it is reading and comes across a smiley the software will say what the smiley means, like “smiley face” for 🙂, and “thinking face” for 🤔, anyways, I sometimes get surprised. So, should you be one of them folks that understand smiley faces and you see one that seems out of place on my blog, don’t be too alarmed it might be that I just have no ideal what it means!
I think one thing that could be helpful is if smiley face software/keybroad makers would add in a little feature …. where-as if you hover over the smiley it would give you the meaning it was intended to mean …. that sure would be helpful, don’t you think?
I don’t think that is going to happen because, I think smiley are not all that poplar anymore except for the very young and a few of us old dogs that are headed back to our child like ways!

Have a nice day folks